In 1980 the gallery was relocated to larger premises
taking advantage of 320 sq. metres on the first floor of a Victorian Building (The Butterworth Building 1900)
at 890 Hay St Perth City near His Majesty's Theatre.

The new building was opened in February 1995 with a Howard Taylor exhibition. 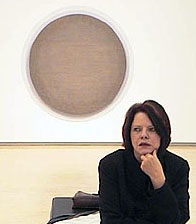 Although the main emphasis of the gallery is to promote
the work of living West Australian artists the gallery will continue to curate and present exhibitions of Australia
wide origin in order to further encourage and stimulate dialogue.